This is a re-creation of the game Tower of Babel originally created by Pete Cooke and published by Microprose for 16-bit home computers ca. 1989.

You control (up to) three robots called "spiders", each with different abilities. Your goal is to clear every level of the game. The levels (called "towers") have differing winning conditions, but clearing a level usually involves using the Zapper to destroy objects, using the Pusher to move obstacles out of the way, and using the Grabber to collect Klondikes.

Click the buttons at the bottom of the screen (or use the keyboard) to control the spiders. Click and drag the main view window to look around.

NOTE: Your progress through the game is automatically saved in a browser cookie.

The goal of the first tower is to grab the three Klondikes directly in front of your Grabber. However, if you try to grab the Klondikes straight away an enemy Pusher Cannon will push a block in front of the remaining Klondikes, making the tower unwinnable (if this happens to you, open the menu and select "Restart Tower").

The key to clearing this tower is to move your Pusher onto the lift directly west of your Grabber, then have it push the block north out of the way of the Pusher Cannon. However before you can do this, there is an enemy Zapper Cannon hidden behind the lift that first needs to be removed – a job for your Zapper.

Here is a step-by-step walkthrough:

The Grabber is able to operate certain objects from afar: Freezers, Forcers, and Exchangers. The Grabber is also the only robot capable of collecting Klondikes, which is needed to complete many levels, so take good care of it.

The Pusher can push some objects, like the Block and the Reflectors. It is sometimes able to push certain enemies like the Worm and the Watcher.

Zapper Cannons are dangerous enemies that continuously fire an invisible beam of death. Most Zapper Cannons fire in a fixed direction, though some rotate. They can be destroyed by your Zapper or other Zapper Cannons.

Worms mindlessly move back and forth. They mostly get in your way. They cannot be destroyed by your Zapper, but zapping them will cause them to reverse direction.

Hoppers are relatively harmless bots that wander around the map. They mostly get in your way. They can be destroyed by your Zapper or other zapper beams.

Watchers are similar to hoppers, with the important distinction that they can't be destroyed by your Zapper or zapper beams.

Lizards are similar to Worms, but with a twist: they "eat" a floor tile when they reverse direction.

Mines will explode when anything moves near them, destroying anything in adjacent tiles. On some towers, this will also cause the tile underneath to be destroyed as well. Cannot be zapped, but can be pushed.

Time Bombs have a fuse that slowly dwindles from the start of gameplay. Eventually the bomb will explode, destroying anything in adjacent tiles. Cannot be zapped, but can be pushed.

Klondikes are collectible objects that can only be collected by your Grabber. Collecting these is the objective of many towers.

Lifts allow your spiders to reach different elevations of the tower. They can be spotted by their distinctive gray borders on the top surface.

Forcers are special objects that can be operated by your Grabber. When activated, they raise or lower all unoccupied lifts in the tower.

Freezers, once activated by your Grabber, will freeze anything on the map except for your Spiders and other Freezers. They have a cooldown before they can be activated again.

Wipers, once activated by your Grabber, will destroy a complete row of unoccupied tiles in each cardinal direction.

When your Grabber grabs an Exchanger, the Exchanger is destroyed and the Grabber is teleported to the tile that originally held the Exchanger. It acts like a Reflector when zapped.

Converters will convert a zapper beam passing through them into a pusher beam and vice versa.

Blocks are pushable objects that block movement and zapper beams.

Are there to be shot.

The "Zapper", "Pusher", and "Grabber" buttons activate the respective spider. Use the arrow buttons to issue movement commands to the selected spider. The buttons on the bottom row select cameras that allow you to get an overview of the tower (NOTE: some towers disable the cameras).

Left-click and drag the viewport to have a look around. When a camera is activated, right-clicking and dragging the viewport will move the camera around.

Certain buttons can be activated using the keyboard:

Macros allow you to program your spiders with small scripts. They can make it easier to have multiple spiders simultaneously doing useful work.

Press the "Record" button to begin recording a macro. Any movement commands issued while recording is active will record the command into the macro (rather than moving the spider). Once you have finished creating the macro, press the "Stop" button (or toggle the "Record" button off). Press the "Run" button to run the recorded macro, or press the "Run All" button to run macros on all your spiders simultaneously. The "Delete" button will erase the last command in the macro, and the "Clear" button will completely erase the macro. 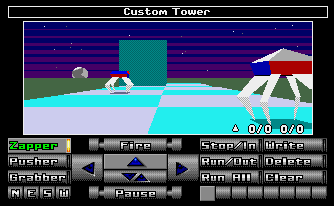